Judge Dredd: The Cursed Earth, Chapter Two – Into The Darkness

SYNOPSIS
Dredd makes preparations and ventures out into the Cursed Earth.

FIRSTS & LASTS
First appearances of the K2001 Land Raider, the Killdozer and Judges Patton and Gradgrind.

The K2001 Land Raider has a four wheel drive, thermo-nuclear engine, flame thrower, machine guns and a special compartment, while the Killdozer is equipped with Nemesis rockets, cannon, laser guns, two Quasar bikes and is nuclear blast-proof. The two vehicles link up to form a modular fighting unit. 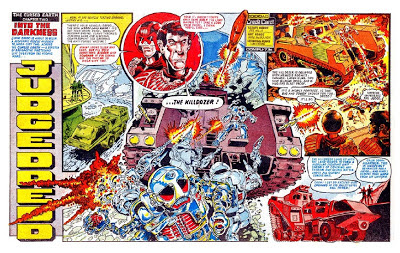 JUDGE DREDD
He is heading to Mega-City Two by land with a K2001 Land Raider and Killdozer combined, a detachment of war droids, Judges Jack, Patton and Gradgrind as well as Spikes Harvey Rotten.

OTHER CHARACTERS
SPIKES HARVEY ROTTEN
He was accused of running guns for the Muties of the Cursed Earth. He was sent to the Mega-Penitentiary, but convinced the governer he had reformed and was sent on a visit to Mega-School Three where he killed his warder. He and Dredd fight and the Judge convinces him to volunteer to go on the Cursed Earth mission. 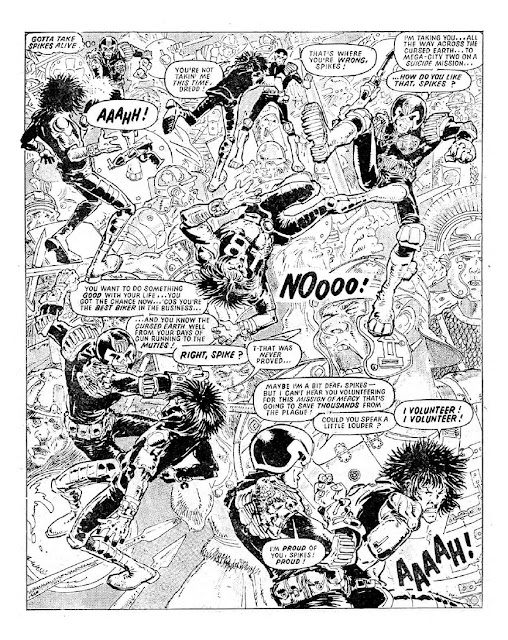 BEST LINES
Spikes: "Drop der gun, Judgey - or da kid gets a draught between his ears!"

CATCHPHRASES
Dredd says "Drokk it, I'm not a schoolboy" to the school's robot and "By Stomm!" when he sees Spikes with a gun to a child's head.

CONTINUITY & CROSSOVERS
Dredd mentions that he and Judge Jack fought together during the robot rebellion in 'Robot Wars', Part Three, while Spikes Harvey Rotten first appeared in 'The Mega-City 5000'.

INFLUENCES & REFERENCES
The K2001 Land Raider and Killdozer was very closely based on a vehicle made available in the Matchbox Adventure 2000 range. Damnation Alley is a 1967 short story by Roger Zelazny, which features a prisoner who is offered a full pardon in exchange for taking on a suicide mission, a drive across a ruined America to deliver an urgently needed plague vaccine. Zelazny expanded it into a novel in 1969 and it was adapted for film in 1977. Judge Gradgrind shares his name with a headmaster from Hard Times (1854) whose name is now used to refer to someone who is hard and only concerned with facts and figures, while the most famous Patton was obviously United States Army General George Smith Patton, Jr. (1885–1945).

MISTAKES
Spikes Harvey Rotten's appearance has changed considerably since he raced in 'The Mega-City 5000', maybe he has had his face altered as part of the process of becoming reformed.

REVIEW
The showing off of the vehicles is nothing special, but the reintroduction of Spikes Harvey Rotten and his subsequent volunteering is fantastic. Where else would you get to see Vikings fighting Romans in a futuristic school?