SYNOPSIS
Dredd goes in search of some unlikely bank robbers.

INFORMATION
The First Lunar Bank is based in downtown Luna-City.

Justice Central has its own face-changing machine. Some criminals can serve forty years on a dome repair gang.

JUDGE-MARSHAL DREDD
He suspects the Tooley brothers of using a face-changing machine to commit bank robberies so he alters his own features to appear like those of their lawyer, Manny Bloom, and records their conversations as evidence.

OTHER CHARACTERS
ALBERT, BRAD AND LAPSLEY TOOLEY
They bought a face-changing machine and altered their appearance to commit bank robberies. They first wore the faces of Charlie Chaplin, Stan Laurel and Oliver Hardy before changing again to those of Groucho Marx, Harpo Marx and Chico Marx respectively. When Dredd discovered they bought the machine he had them interrogated, but their lawyer, Manny Bloom, successfully got them released. Dredd replaces Bloom using a face-change machine and accompanies the Tooley brothers back to their apartment and arrests them.

MANNY BLOOM
A lawyer on Luna-1. He represents the Tooley brothers. Dredd impersonates him usng a face-change machine.

BEST LINES
Dredd: "The face is Manny's - but the fist is Dredd's." 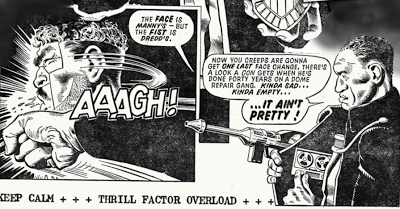 WORST LINES
Al Tooley: "Thanks, Manny. If you hadn't got here they'd have tried to do us."

CATCHPHRASES
"That's another fine mess you've got us into" was Oliver Hardy's catchphrase.

CONTINUITY & CROSSOVERS
Face-changing machines were previously seen in Judge Dredd: 'The New You'. 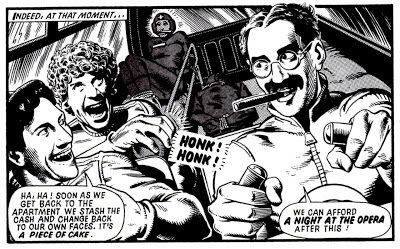 REVIEW
This is a brilliant concept, but it would have been undermined by poor likenesses. Thankfully the likenesses in Brian Bolland's artwork are extraordinary. The opening double page and the panel of the Marx brothers in a stolen ambulance are fantastic. Dredd's solution is great and somehow comes as a complete surprise.