SYNOPSIS
Walter is a contestant on a TV quiz show.

FIRSTS & LASTS
This is probably the first use of the name Schicklegruber in 2000 A.D.

INFORMATION
Masterbrain is a TV quiz show on Luna-1. Contestants are required to answer questions on a particular subject and are playing for the Golden Brain Award. Interruptions are forbidden and the penalty is potential death by crocodile.

WALTER THE WOBOT
He appears on Masterbrain as a contestant with Judge Dredd as his specialist subject. He wins and is awarded the Golden Brain Award.

OTHER CHARACTERS
JUDGE MARSHAL DREDD
His favourite phrase is apparently "Drokk it!"

MAGNUS MAGNANIMUS
Host of Masterbrain. Outwardly human, he is actually a robot who ensures that Walter wins. 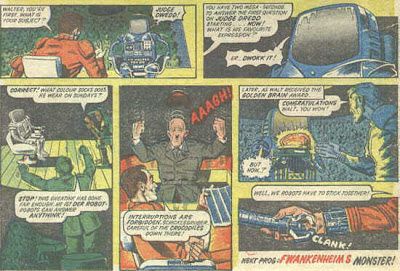 HERMAN SCHICKLEGRUBER
He is an interior decorator and contestant on Masterbrain. He appears to be wearing a World War II German SS uniform and a toupee. He objects to Walter's involvement in the programme and Magnus Magnanimus drops him into a pit of crocodiles.

BRIDGET LA BOOB
She is an actress and contestant on Masterbrain.

JULIAN PITCHFORK
He is a lecturer on the subject of moon rocks and contestant on Masterbrain.

DEATHS
Possibly one. Schicklegruber may well get eaten by crocodiles.

BEST LINES
Magnus Magnanimus: "You have two mega-seconds to answer the first question on Judge Dredd starting...now! What is his favourite expression?"
Walter: "Er...Dwokk it!"

WORST LINES
Magnus Magnanimus: "Correct! What colour socks does he wear on Sundays?"

CATCHPHRASES
Walter says Dwedd and gweetings, and also relays that Dredd's favourite phrase is "Dwokk it!", while Schicklegruber's accent is portrayed with phrases like "Goot evenink" and German words in English sentences: "He ist der robot - robots can answer anythink!"

INFLUENCES & REFERENCES
Masterbrain is obviously a reference to Mastermind (1972), a quiz show in which contestants answer questions on a specialist subject of their choice and on general knowledge, presented between 1972 and 1997 by Magnus Magnusson (1929–2007). Schicklegruber looks not dissimilar to Adolf Hitler (1889–1945) and indeed his paternal grandmother's name was Maria Schicklgruber (1795 –1847). She registered Adolf's father as Alois Schicklgruber (1837–1903) and entered "illegitimate" in place of the father's name. Thirty nine years later, Alois decided to apply to legally take the name his presumed father Johann Georg Hiedler (1792–1857), which somehow became Hitler. This all begs the question whether millions of people would ever have catastrophically put their trust in a man called Adolf Schicklgruber and possibly makes the parish priest in Döllersheim who amended the records the cause of more bloodshed than he could ever have imagined.

MISTAKES
The black and white reprinting in Judge Dredd The Complete Case Files 01 omits the word Frankenheim's because it was written in red, instead there is a huge gap before the word Monster!.

REVIEW
Walter's broadcasting career continues and he discovers a robot underground into the bargain. On the face of it, this is merely another throwaway strip for Walter, albeit one with great artwork from Bolland, but the inclusion of Schicklegruber and the revelation that Magnanimous is a robot makes it something much more intriguing.

Next Prog: Fwankenheim's Monster!
Posted by Dave at 10:00