INFORMATION
The first Lunar Olympics is being held at the Giant Crater Stadium in Luna-City. Among the nations competing are teams from the Sov-Cities, the Brit-Territories and Luna-1. Sportstime are a Luna-1 broadcaster showing the Olympics. 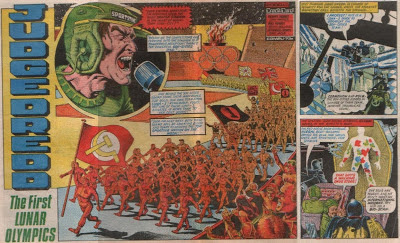 Events include pole vault (at heights reaching forty metres), shot put and the Dustboard Run, a new sport which works on the same principle as ski-jumping. Justin Bonnard competes for the Brit-Territories in the Dustboard Run, a new Moon sport, but he overshoots the safety nets and lands badly. Nikolai Zilch is a Sov sprinter with bionic thighs, while Tyrone J. Tyrone runs for Luna-1 and has a streamlined skull as a result of two years of cybo-surgery. Zilch is shot dead by a spectator and so Tyrone wins the race. The reduced gravity of the Moon sees many Earth-based sporting records broken.

Bio-scans are used to ensure that none of the competing athletes is more than twenty per cent bionic, while a spectro-scan can reveal any drug or steroid use: steroids show up as red areas and stanimine, taken to improve stamina, appears as blue and green areas.

At the end of the week-long competition the top three positions on the medal table are 24 Golds won by the Sov-Cities (among the Sov-City gold medal winners is Olga Borzoi for the shot put), 24 by Luna-1 and 8 by the Brit-Territories.

The symbol of the Sov-Cities is a hammer and sickle. Sov-City citizens can find themselves in labour camps to avoid potential embarrassment. Following the death of Judge Kolb, they declare war on Luna-1. Named Sov-City Judges: Judges Cosmovich, Judge Kolb (deceased).

JUDGE-MARSHAL DREDD
He is in charge of security for the Lunar Olympics and disqualifies one Sov athlete for being more than a fifth bionic.

OTHER CHARACTERS
JUDGE COSMOVICH
Sov Judge. He attends the athlete's inspections at the first Lunar Olympics on Luna-1 with Judge Kolb. When he catches Zilch's possible murderer, he intends to kill him. Dredd stops him, Kolb is killed and Cosmovich declares war on Luna-1.

JUDGE KOLB
Sov Judge. He attends the athlete's inspections at the first Lunar Olympics on Luna-1 with Judge Kolb. He is killed by an accidental ricochet from Dredd's gun.

ARRESTS
None, but the Sov athlete that Dredd disqualifies is sent to labour camp by his own legal system.

DEATHS
Presumably three. Zilch is vapourised by someone in the stadium's east stand, Dredd kills Judge Kolb with an accidental ricochet while Justin Bonnard's bad landing means he probably won't be getting up again.

BEST LINES
Judge-Marshal Dredd: "Drop that gun, Sov! You have no power to act in Luna-1. We have no death penalty here!"
Judge Cosmovich: "Then your law is weak, Dredd. We'll show you how it is done..."

WORST LINES
Judge Cosmovich: "We are at war!"

Don't you need to check with a superior?

INFLUENCES & REFERENCES
The 1976 Montreal Olympics would were the first to feature proven cases of anabolic steroid doping. Eight athletes, mostly weightlifters, were caught whilst competing for Bulgaria, Poland, Sweden, Czechoslovakia and the USA.

MISTAKES
The artwork for the medal table reads Lunar-1. The hammer and sickle is flipped.

In the black and white reprint, the spectro-scan is merely white with no suggestions of where the localised patches of red, green and blue should be or how widespread they are.

NOTES
2100 would indeed be an Olympic year.

REVIEW
Bolland's artwork is fantastic, the sports are brilliantly depicted and the Sov-Judges are a very welcome addition to the mythos. The declaration of war comes as something of a shock.