INFORMATION
There is a robot fancy dress ball on Luna-1.

Acme Plumbing is a plumbing company based on the Moon.

WALTER THE WOBOT
He has been invited to a fancy dress ball and decides to have an oil bath in preparation. He gets his toe stuck in the tap and calls a plumber. The tap remains attached to Walter and he elects to go to the fancy dress ball as tap dancer Fred Astaire.

OTHER CHARACTERS
JUDGE-MARSHAL DREDD
His accommodation has a videophone in the bathroom.

BEST DIALOGUE
Walter: "What will I wear tonight? Something extwavagant, perhaps?"

MISTAKES
Walter was revealed to have detachable feet in Judge Dredd: Meet Mr Moonie, which would make this dilemma pretty easy to solve.

RETROSPECT
In an astonishingly prescient move, the plumber bears more than a passing similarity to Bob Hoskins who would subsequently play a plumber in the Super Mario Bros movie (1993). 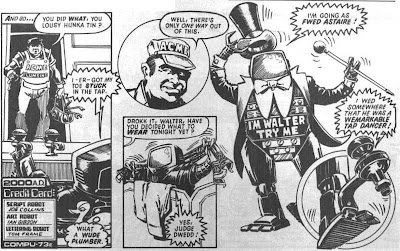 Joe Collins wrote fourteen Walter The Wobots in 2000 A.D. in all and drew Action Mouse for Action.

REVIEW
Understandably the story here is slight, but it's interesting that our first real insight into Walter's Dreddless adventures isn't his day to day life , but instead something more out of the ordinary and yet not particularly extravagant either. It's very telling that we don't see Walter at a party, but instead preparing for it. It's also interesting that Dredd is unseen, although we hear his words from the next room as if actually seeing him would cross some line.
Posted by Dave at 10:00