SYNOPSIS
Walter is saved by his brother who promptly kidnaps him.

FIRSTS & LASTS
First appearance of Gus (apart from his shadow).

Spitting on the sidewalk is a crime with a penalty of 5c. 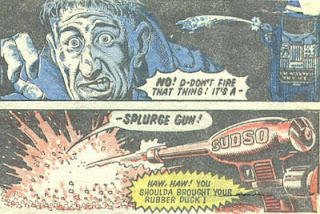 WALTER THE WOBOT
He is rescued from the mugger by his brother, Gus, who then kidnaps him.

OTHER CHARACTERS
GUS
He is a robot of the same model as Walter. They were assembled on the same day and regard each other as brothers. He disguised himself as Walter. The plaque on his front reads reads: 'Gus Rules OK?', but he has covered it up with 'I'm Walter, Try Me'. He kills the mugger accosting Walter and then kidnaps his brother.

JUDGE-MARSHAL DREDD
Walter believes Dredd will get Gus for his crimes.

DEATHS
One. Gus drowns the mugger with his splurge gun.

BEST LINES
Walter: "You dwowned him, you wotter!"
Gus: "Shaddup, bums like him deserve The Bubbly Death. He ain't had a bath in years!"

REVIEW
This potentially throwaway silly little strip that relies heavily on puns takes a much darker turn here. From mugger to murder is a big step and drowning in bubbles doesn't do anything to moderate that. Brian Bolland's art is still beautiful and The Bubbly Death is a fantastic panel.