SYNOPSIS
Dredd's convoy reaches Deliverance while the town is under attack.

FIRSTS & LASTS
The first example of law among the lawless and the first time we see that not necessarily everyone in the Cursed Earth is a mutant.

INFORMATION
Deliverance is a town in the Cursed Earth. The town's roofs are covered in spikes and it is equipped with flak guns and a siren. It has suffered from food shortages. The town's Lawgiver sentences its residents for their crimes. Being eaten by the Devil's Lapdogs is a form of execution.

The post-atomic war great winds lifted houses, cars, rocks etc into the air and formed a death belt. The rats have learned how to glide on air currents and became known as the Devil's Lapdogs. 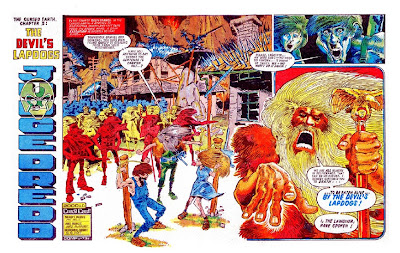 JUDGE DREDD
He is arrested and incarcerated by Deliverance's Lawgiver when he attempts to intervene in the execution of Samual and Rebecca.

OTHER CHARACTERS
SPIKES
His Quasar bike is fitted with a self-destruct mechanism controlled from Dredd's bike. He will get a free pardon if he helps Dredd deliver the vaccine to Mega-City Two.

SAMUEL AND REBECCA
Husband and wife, residents of Deliverance found guilty of stealing food from their neighbours.

ARRESTS
None, although Dredd is locked up and sentenced to death. 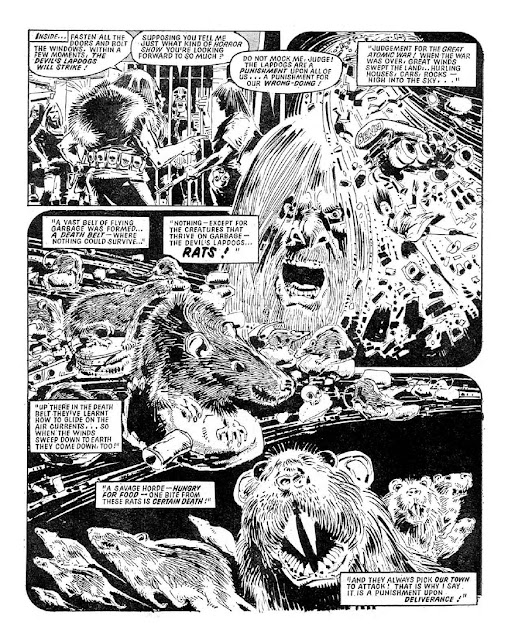 BEST LINES
Lawgiver: "How I wish I could be merciful, my child. But I have no choice...The demons of the air must devour you. Because...that is the law!"
Dredd: "And I Am The Law...Let Them Go!"

WORST LINES
Judge Jack (at the accusation that he has been cheating at a game played against someone else who is cheating): "Why you...!"

INFLUENCES & REFERENCES
Deliverance is also the name of a 1972 thriller film directed by John Boorman, based on a 1970 novel of the same name by James Dickey. A Lawgiver was a central part of the mythology of the first two Planet Of The Apes films and was finally seen in the fifth, Battle For The Planet Of The Apes (1973).

I am unable to find any other examples of R.O. Bott's comics career. I am forced to conclude that this was his or her sole effort.

REVIEW
The evangelical preachiness of the Lawgiver is great and it's nice that Dredd's first attempt at bringing law to the lawless fails so miserably and sees him locked up, the Rats floating on air currents is the wrong side of ridiculous.