INFORMATION
In 2014, there was a prize of ten million credits for proof of life on the Moon. The only form of life discovered was a microscopic virus which causes the human skull to swell up like a balloon. It can prove fatal, but there is a vaccine. It became known as Moonie's Virus, named after the first sufferer.

Luna-City has a prison. Moonie's Peak, has a river of Mercury running pased it.

Lunar projections are a moon phenomena akin to holograms. Lunar dust storms could rip a man's flesh from his bones in seconds.

JUDGE-MARSHAL DREDD
He visits Moonie's Ranch, works his way through his Museum Of The Moon and survives it. He arrests Moonie.

OTHER CHARACTERS
WALTER THE WOBOT
He accompanies Dredd to meet Moonie. Walter falls into his Mercury river and is sucked under, but Dredd rescues him. He springs his ankle clips and loses his right foot. He and Dredd are trapped in a vacuum behind bullet-proof glass, Walter emits a high frequency sonic wave and smashes the glass. He burns out circuits and smashes his screen in the process. 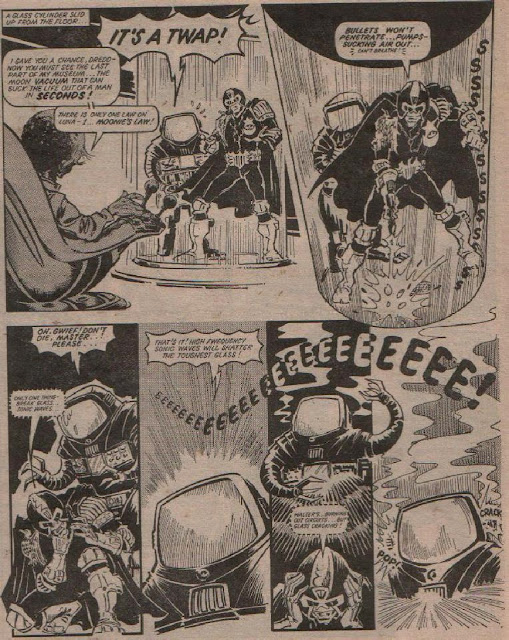 C.W. MOONIE
He first landed on the moon in the spring of 2014, he was looking for signs of lunar life. He climbed what is now called Moonie's Peak and discovered its neighbouring river of mercury. He found life and claimed a ten million credit prize, but it was a microscopic virus which he himself fell victim to. It became known as Moonie's Virus. He hid himself away and hasn't been seen for over forty years. He used his prize money to buy, cheat and steal his monopoly on the Moon. His ranch contains a Museum of the Moon, with which he attempts to kill Dredd.

BEST LINES
Moonie: "There is only one law on Luna-1...Moonie's law!"

WORST LINES
Walter: "It's a twap!"

CONTINUITY & CROSSOVERS
Dredd mentions three attempts on his life which were seen in 'Luna 1', Showdown On Luna-1 and either Red Christmas or 22nd Century Futsie.

REVIEW
The Moonie storyline draws to a close with finale that seems less crime boss conspiracy and more mercurial mystery tour. Moonie's reveal is a surprising one and it's nice that Walter saves the day, although it is a bit obvious that in narrative terms that's exactly why he's been taken along.