Judge Dredd: 'The Oxygen Board'

My thanks to Douglas Wolk for his thoughts below...

NAME
Judge Dredd: 'The Oxygen Board'

SYNOPSIS
A gang swaps Luna-1's oxygen for Tranq gas to rob the colony.

INFORMATION
Luna-City has moving sidewalks and a monorail. Huge Astro-Tankers make daily deliveries of oxygen to docking bays above Luna-1's domes. The oxygen is combined with other gases at mixing terminals and sent into the dome. Oxygen users pay their bills to the Oxygen Board, unpaid bills can result in cutting off the supply and extraction of current stock via an oxymeter. There is a old Luna Saying: "A smart man can beat the law - but, baby, only a fool bucks the Oxygen Board."

A criminal gang exchanges oxygen for Tranq gas, a sedative which induces hours of sleep, and uses the opportunity to rob the colony. 53,000 citizens die and over half a million are injured as a result of the tranq gas incident. It is the biggest disaster in history of Luna-1. 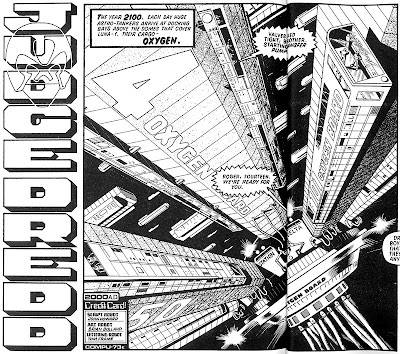 Plasti-Flakes is a breakfast cereal.

Judges can deputise robots to assist them as robot emergency squads.

JUDGE-MARSHAL DREDD
When Luna-1's population are affected by Tranq gas, Dredd attempts to limit the death toll by deputising robots to assist him, stopping a moving sidewalk and ordering an antidote be found and released into the dome.

OTHER CHARACTERS
JUDGE TEX
He assists Dredd in attempting to limit the death toll.

DEATHS
53,004. Machine-related accidents as a result of tranq gas kill 53,000 people: we see deaths from vehicular crashes, an office fire, a monorail crash and drowning in a bowl of Plasti-Flakes. While the four perpetrators of the crime die of ill-timed oxygen starvation as they are trapped inside when they themselves are cut off.

BEST LINES
Tex: "Wal, guess we got them Tranq gas raiders, after all, Marshall. The Oxygen Board executed 'em fer us!"
Dredd: "Not executed, Tex - cut off! It sure pays to keep your gas bills up to date."

CATCHPHRASES
Dredd notches up another "Drokk!"

MISTAKES
The wrong member of Smith's gang answers his questions about the lost key.

REVIEW
Dredd himself doesn't appear in the first three pages and has no part in the resolution, thousands die and all for a petty distraction to a bank robbery. Just when you think Bolland's art can't improve any more, it does. This is the most beautiful Judge Dredd yet and all the better that it's combined with a story that is brilliantly inventive and wonderfully bleak.

GUEST REVIEW by Douglas Wolk
Sometime around 1980, the American mail-order back issue company Mile High Comics indicated in their catalogue that they had a big bunch of British comic books, and while they didn't particularly feel like selling them issue-by-issue, if you sent them, I believe, six dollars they'd send you a stack of twenty of them. That was a lot of money for me then, but it also sounded like a very interesting proposition. What I got in the mail, six dollars later, was a pile of 17 issues of The Mighty World Of Marvel and various other Marvel U.K. titles, and three of 2000 AD: Progs 57, 58 and 60; 'The Oxygen Board' was the first Judge Dredd episode I read.

For a story that barely has Dredd in it--he doesn't show up until the fourth page, has a respirator covering the parts of his face that his helmet leaves bare until the bottom of the 5th, and doesn't really play a role in the denouement except to turn up and snark in the final panel--it was a terrific introduction to the series. Even as a tiny sprog, I admired its economy: I remember going to my local comic book store to ask them if they could get any more issues of this amazing weekly comic book, haltingly trying to explain to the uninterested clerk how much cool stuff "Judge Dredd" ("never heard of it!") crammed into seven pages.

And 'The Oxygen Board' really is a wonder of economy: just 29 panels long (including Brian Bolland's page-and-a-half splash image, a piece of design so imposing that the story doesn't need anything more than tiny human characters showing up until three panels in). In hindsight, it reminds me strongly of some of Will Eisner's best Spirit stories--the ones in which the Spirit would play a walk-on role or show up for a quick action scene, but that were more about life in Central City, and that tended to start with a design flourish and end with a sly gag. (The Spirit actually transferred its setting to the moon for a few months before it ended, although that seems to have been more of a desperation move.) Also, it's full of "thrill-power," both in the sense of nonstop big crazy concepts ("astro tankers" bearing oxygen! the "payment control robot"!) and nonstop violence (shootings! train derailments! a guy falling asleep in his breakfast cereal!).

This is the work of a young Bolland--it doesn't have the assured formality of the work he was doing even six months later--but he still gets off one fantastic image after another, especially the full-column shot of Dredd on pg. 6 that echoes the full-column shot of the derailing monorail on the previous page. (Aside from splash pages, Judge Dredd had scarcely ever previously had a single panel going all the way down one side of a page; to get two in a row was a really unusual compositional choice, but it really works here.) That's also the only substantial image of Dredd in the whole story--elsewhere, he's mostly in the background or in a headshot or in silhouette or (in the final panel) seen from behind, crouching. Also, is it me, or do the little image of Tex in the final panel on page 5 and the foreground thug on pg. 6, panel 2 look like they were drawn (or at least inked) by Bolland's frequent collaborator Dave Gibbons?

Consider, also, how much exposition John Wagner gets across, and how easily he does it. The year is established in the first panel; the setting's name and what it is in the first two. The relationship between robots and humans is established in passing, and so is Dredd's job (he's referred to as "Marshal"). What the criminals pull off is a fairly complicated scheme, conveyed with a bare minimum of words and images. And that "goddam" at the end: how did that sneak past IPC's standards-and-practices department? (It's not even euphemized as "Grud" or anything!) The ending's still very funny, although I can't think of many apartment doors that only unlock from the inside with a key. But what do you want from seven pages, anyway?

Douglas Wolk, KTT, writes about comics for The New York Times, The Washington Post and elsewhere. He is the author of Reading Comics: How Graphic Novels Work And What They Mean (2007), which won an Eisner Award and a Harvey Award. He also wrote the Dredd Reckoning blog, and is collaborating with artist Ulises Farinas on IDW's forthcoming Judge Dredd: City Of Courts.