SYNOPSIS
Dredd is on the hunt for an arsonist.

Judges have access to a machine which can remove a layer of an individual's skin and test it for the presence of specific chemicals.

JUDGE DREDD
He is in charge of the rescue operation for a burning stratoscaper. He proves that the Firebug is McCracken and returns home to discover Walter's suicide note. Dredd put out an emergency call to track Walter down and is informed that the robot is on top of the Wengler Building. Dredd is present as Walter slips and is caught in a Police net. He has the robot repaired and files the deeds of ownership to make Walter his property. 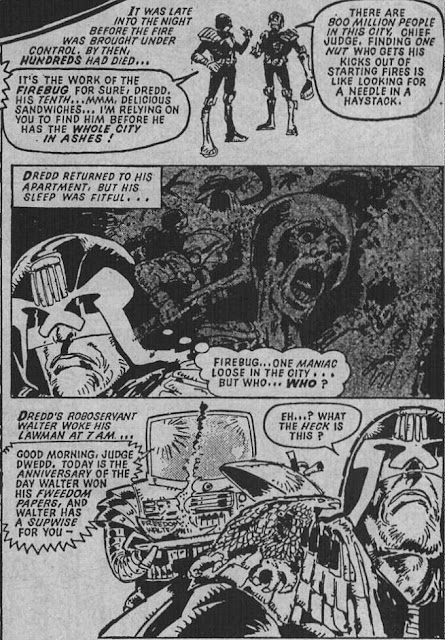 OTHER CHARACTERS
WALTER THE WOBOT
He delivers Dredd sandwiches at the site of the fire rescue operation. He burns his freedom papers and has deeds of ownership drawn up which he then gives to Dredd who rejects them. Walter decides to throw himself off the top of a building, but the Police catch him in a net. Dredd has him fixed at a roboclinic and files the deeds of ownership making Walter firstly his property and secondly a very happy robot. 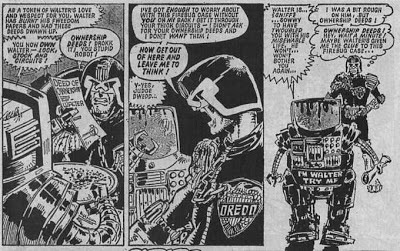 THE CHIEF JUDGE
He eats Walter's sandwiches and puts Dredd onto the trail of the Firebug.

CHARLES Q. McCRACKEN
Known as Chuck, he is the owner of several buildings in Mega-City One. He has been in financial trouble recently and set fire to ten of his buildings to collect the insurance money. He is nicknamed the Firebug. Dredd submits his top layer of skin for chemical testing and when the results show traces of petrol based fire-raiser, he arrests him for ten counts of arson and 718 counts of homicide.

ARRESTS
One. McCracken for arson and murder.

BEST LINES
Glide Chute Escapee: "Be careful, you fool! Where were you during glide chute practice?"

CONTINUITY & CROSSOVERS
According to Walter it's the (one year?) anniversary of his receiving freedom papers, which is presumably a reference to 'Robot Wars', Part Eight.

REVIEW
Firebug's opening double page spread is great, insurance-related serial arson attacks are a satisfying down-to-earth crime with a believable motivation and removing a layer of McCracken's skin for testing is a nice touch, although the simplistic assumption that the owner would have acted alone limits the credibility of the strip. The story splits into two distinct halves and both try to be darker than the other. It's Walter and Dredd's anniversary and who could have predicted when they first met that the silly little robot with a speech impediment could ever have been suicidal? This strip earns it.