SYNOPSIS
A schematic of Walter.

The robot's 'neck' includes its voicebox made by British Leymek and an oil intake tank, which allows oil to be pumped to all moving parts.

The torso area boasts a juke box made by Bang and Olufson, a tape recorder, a Synthi-Caf dispensor (with external buttons for manual drink selection), a washing and drying up unit, a hot and cold air conditioner, a locked drink storage unit, a friction drive motor, an ash tray, a drink intake and pleasure circuit.

The arms are detachable and bracelet jointed for greater flexibility and contains a water pipe. The wrist units are interchangeable and can be either a three fingered hand, water hose, vacuum cleaner or power scissors.

The legs feature drives in both the upper and lower legs and two spring clips on each ankle joint. 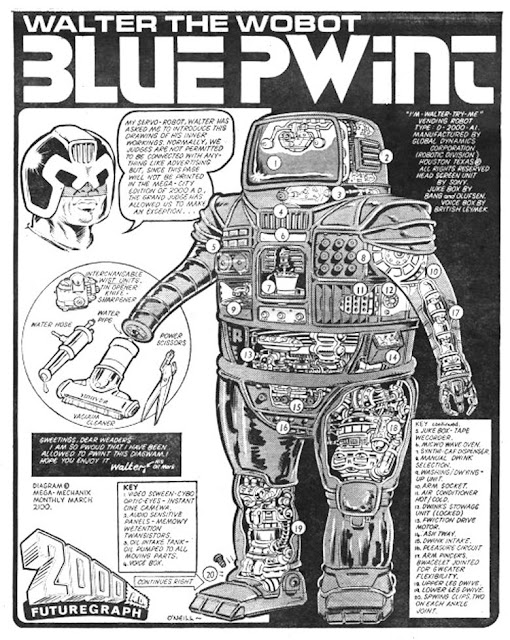 Judges are not permitted to be connected with advertising, except with permission of the Grand Judge.

OTHER CHARACTERS
JUDGE DREDD
He makes an appearance in an advert for D-2000 AI Vending Robots.

THE GRAND JUDGE
He has made an exception to allow Dredd to advertise for D-2000 AI Vending Robots, because the advert will not be seen in Mega-City edition of the publication.

BEST LINES
Walter: "I am so pwoud that I have been allowed to pwint this diagwam. I hope you enjoy it."

WORST LINES
Dredd: "...normally we Judges are not permitted to be connected with anything like advertising..."

CONTINUITY & CROSSOVERS
Global Dynamics Corporation made the Powergear.html and Super Liner used by the Harlem Heroes.

REVIEW
It's credit to Kevin O'Neill that Walter's construction is as plausible as it is and largely mirrors human anatomy. Note the location of Walter's pleasure circuit.
Posted by Dave at 10:00