SYNOPSIS
Dredd returns to Mega-City One, but is reluctant to arrest anyone.

INFORMATION
Mega-City One has a population of 800 million. On one particular street in the worst area of the city 4000 crimes are committed every day.

A Judge previously seconded to another jurisdiction must have reinstatement papers and swear in on Volume 12 of the Juro-Penal Code before they can make any arrests in Mega-City One.

JUDGE MARSHAL DREDD
His six months as Judge Marshal of Luna-1 are up and Judge Tex succeeds him on his recommendation. He returns to Mega-City One and witnesses the Suction Gang's robbery of a jewellery store and the South Side Boys breaking up a bar for protection money, but he doesn't attempt to intervene. A Rookie Judge delivers his reinstatement papers and Dredd swears himself back onto the force. Dredd borrows the Rookie's bike and promptly makes two arrests and incapacitates three more perps.

OTHER CHARACTERS
WALTER THE WOBOT
He returns with Dredd.

MARIA
She is pleased to see Dredd return.

JUDGE TEX
He takes over from Dredd as Judge Marshal of Luna-1.

ARRESTS
Five. Dredd leaves three hoods kayoed for a Rookie to arrest and books another two himself.

BEST LINES
Dredd: "Good morning, citizens. I would remind you that armed robbery is illegal in Mega-City 1."

WORST LINES
Citizen: "Judge Dredd's flipped his lid for sure!"

CONTINUITY & CROSSOVERS
It's been six months since Judge Dredd: 'Luna 1'. 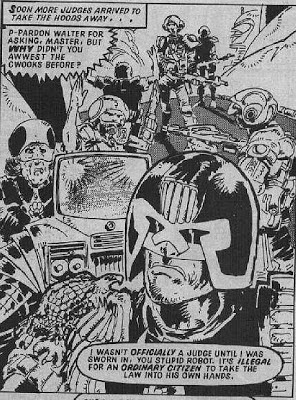 REVIEW
The story is slight, but the opening panel is a great hook which sustains the rest of the strip. The artwork is great, although the sequence in the bar is a little confused. This probably seemed like a mission statement for what the strip was doing now. A return to a pre-Luna-1 dynamic, but it's obvious now that this would be short-lived and a return to 'normal' would be a long way off. 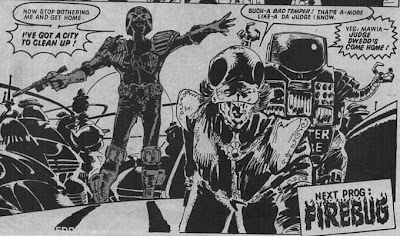