SYNOPSIS
The war between Luna-1 and the Sov-Cities is fought like a team sport.

INFORMATION
Wars are no longer fought by armies, but instead by combat units of four with one reserve each and an umpire. The fighting is televised.

The war between the Sov-cities and Luna-1. Troops on both sides wear anti-blast suits, but the Sov suits seem stronger. The Sovs have an electro beam gun that can pass through two feet of concrete and explode at a specified range, when coupled with an infra-red sight it can essentially shoot through walls.

The Sovs wanted Luna-1's Apollo Territories, but when they surrender and they are forced to concede some territory to Luna-1. 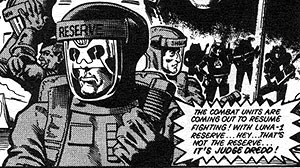 JUDGE-MARSHAL DREDD
He is Luna-1's observer. When Luna-1's reserve is drugged, Dredd takes his place and after the death of Sgt. Sam Stone he is needed in the field. He and Brown are the only survivors of the Luna-1 combat unit. The charge the Sov position and find themselves inside the range of their electro beam guns.

OTHER CHARACTERS
JUDGE COSMOVICH
He is apparently the Sov-cities observer. He bargains with Dredd that he will call off the war in exchange for the Apollo territory. Dredd declines.

PRIVATE IKE BROWN
He and Dredd are the only survivors of the Luna-1 combat unit. The charge the Sov position and find themselves inside the range of their electro beam guns.

DEATHS
Five. Sgt. Sam Stone is dead as the strip begins, Al and Del Shoemaker are shot with the electro beam gun and explode, when Dredd and Brown seize the guns they return the favour and kill two Sov soldiers.

BEST LINES
Dredd: "Listen, you folks at home...today we won a piece of Sov-Cities dirt. So what? Three good men died to do it-that's what matters...Sometimes war is necessary- but don't ever let creeps like this ever tell you it's fun. War is pointless. War is evil...War is hell!"

WORST LINES
Sov: "You have beaten us!"

CONTINUITY & CROSSOVERS
The war from The First Lunar Olympics continues, while Luna-1's Apollo Territories were previously mentioned in The Oxygen Desert, Part 1.

RETROSPECT
Later wars shown in Judge Dredd will not be fought this way.

REVIEW
The juxtaposition between the sporting triumphs of The First Lunar Olympics and war is well-handled and once again Brian Bolland's art is a beautiful thing to behold.