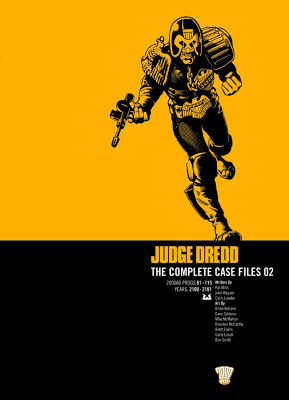 SYNOPSIS
Dredd saves Mega-City One from 2T(Fru)T and moves to do the same for Mega-City Two.

FIRSTS & LASTS
First time a story has been broken up into Chapters, first explicit mention of Mega-City Two, first use of the name Cursed Earth.

INFORMATION
The Atomic War was followed by the Great Germ War, the 2T(Fru)T plague is a disease left over from the latter. It turns sufferer's skin grey, scrambles their brains turning them into cannibals and ten kills them.

Mega-City Two covers five thousand square miles of the Californian West Coast. It has recently been struck by 2T(Fru)T plague and people will die in their thousands. Sector Nine has a Shuttle Stop and is location of Conapt 573. One section is holding out. There are death belts above the city which prevent approach by air.

There is a Mega-City Three. 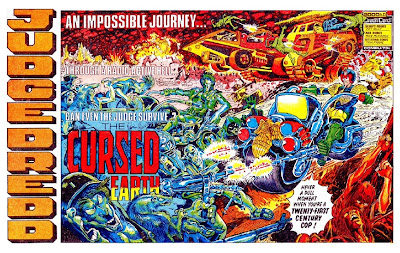 JUDGE DREDD
He agrees to take the 2T(Fru)T vaccine to Mega-City Two by land.

OTHER CHARACTERS
RED
A strato-pilot flying between Mega-Cities One and Two. He is an old friend of Dredd's. He was due to deliver the vaccine for the 2T(Fru)T plague to Mega-City Two, but encountered infected individuals who tried to eat him and he fled. He is one of the ten per cent of people that the vaccine doesn't work on. Due to his exposure he is under quarantine at Mega-City One's Justice H.Q., Red succumbs to the plague and kills Judge Fodder before Dredd can stop him. Dredd is forced to kill Red to prevent the spread of the plague. 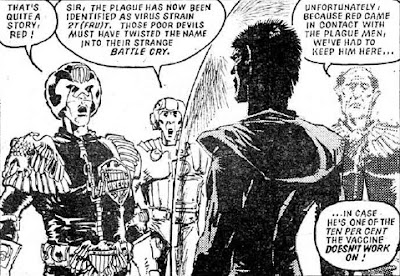 JUDGE FODDER
The Assistant Grand Judge. He is in charge of the Special Security Wing. Red kills him.

BEST LINES
2T(Fru)T Sufferer: "Do not use the guns....it spoils the fruit when you spit out the bullets!"

CONTINUITY & CROSSOVERS
Dredd ventured into the Cursed Earth before in 'The Brotherhood Of Darkness'. Mega-City Two is mentioned in all but name in 'Luna 1'. Dredd kills Red to prevent him using Fodder's gun because it would explode as seen in 'The Wreath Murders'.

INFLUENCES & REFERENCES
2T(Fru)T may well take its name from Little Richard's first single 'Tutti Frutti' (1955), while "Like a bat out of hell" is a phrase that dates back to Jacobean times, but would have taken on a new significance with the release of Meat Loaf's second album in 1977.

RETROSPECT
It's impossible to overstate the significance of this strip. The world building and the epic nature of the story expand Dredd's world enormously.

REVIEW
This is a great beginning, but understandably it marks an end to the short-lived new normal. Mega-City One has only just gotten its favourite son back and now he's off again. The premise is great and the storytelling mature, although the name 2T(Fru)T somewhat undermines it. 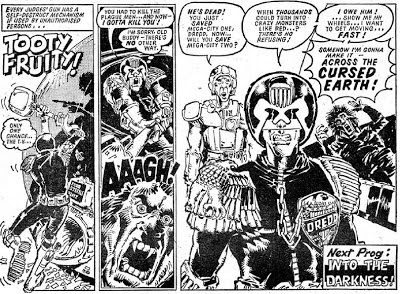