SYNOPSIS
Walter loses a brother, but gains a transistor radio.

INFORMATION
It is said that a dying robot's programme flashes before it a moment before deactivation.

Reprogrammed criminal robots are sold on with new functions.

WALTER THE WOBOT
Gus tries to kill him, but their mother intervenes and saves him, reprograms Gus as a transistor radio and gives him to Walter as a present for Dredd.

OTHER CHARACTERS
GUS
He tries to kill Walter. Their mother reprograms Gus as a transistor radio and gives him to Walter as a present for Dredd. His plaque now reads: 'Gus Turn On OK?'

WALTER & GUS' MOTHER
The robot who initially programmed Walter and Gus. She intervene to prevent Gus killing Walter. She reprograms Gus as a transistor radio and gives him to Walter as a present for Dredd. 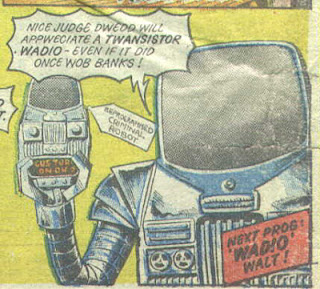 JUDGE-MARSHAL DREDD
Their mother gives a reprogrammed transistor radio Gus to Walter as a preent for Dredd.

DEATHS
None, although Gus isn't what he was.

BEST LINES
Walter: "Scoundwel! Walter will weturn to haunt you!"

MISTAKES
How does Walter prove his innocence? "But Judge Dwedd, it wasn't Walter at all, it was this wecently weprogrammed wadio..."

REVIEW
Sadly, after entering some surprisingly interesting territory this is back to the very silly and even Bolland's art can't quite save it.