I'm alternating between Judge Dredd and Harlem Heroes as I focus on some bits and pieces published during the latter's twenty-seven week run:

SYNOPSIS
Giant talks us through the equipment used by the Harlem Heroes.

INFORMATION
The XJ9 Jet-Pack has a maximum speed of 100 mph, requires a high-octane liquid petroleum fuel and has four turbo jet engines, afterburners and a built-in computer guidance system alters the angle of the thrust nozzles automatically.

XJ9 Jet-Packs are manufactured by Global Dynamics Corporation's Aviation Division in Houston, Texas and used by groups as varied as the army, the police and the Harlem Heroes for traversing minefields, riot or traffic control and playing aeroball respectively.

The jet-pack is controlled with the five buttons on the XJ9 Power Belt: Start, Accelerate, Decelerate, Hover and Afterburner. 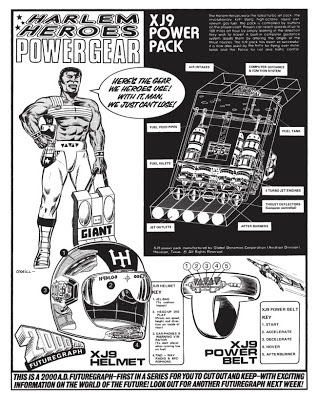 GIANT
He shows off the XJ9 Jet-Pack, belt and helmet.

BEST LINES
Giant: "Here's the gear we Heroes use! With it, man, we just can't lose!"

WORST LINES
Giant: "Here's the gear we Heroes use! With it, man, we just can't lose!"

CATCHPHRASES
Giant: "Here's the gear we Heroes use! With it, man, we just can't lose!"

So, yeah, it's the only line and it's very like the rhyming chants within the strip itself.

This Is A 2000 A.D. Futuregraph - First In A Series For You To Cut Out And Keep - With Exciting Information On The World Of The Future! Look Out For Another Futuregraph Next Week!
Posted by Dave at 10:00