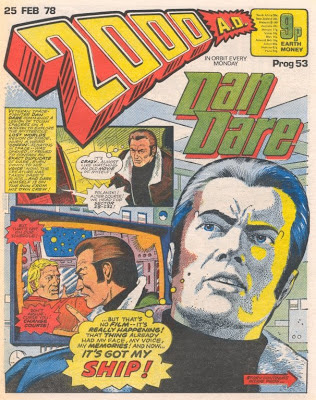 SYNOPSIS
Louis Meyer goes in search of the Syndicate, while the Harlem Hellcats find themselves hanging over a cliff.

INFORMATION
There is a Royal Society of Engineers that serves as trade organisation for servo-electro engineers.

A converter cap is a device that can project images from the memory cells of androids.

The Harlem Hellcats are playing a sudden-death knock-out cup match against the Long Island Sharks. The prize for the winner is an Inferno roadliner, with Inferno bikes and a six-day guarantee. The Harlem Hellcats' roadliner's pressure-apron blows and threatens to send them falling into the sea.

The Long Island Sharks' Firebowl is shaped like a giant shark.

GIANT
He assigns Louis Meyer to investigate the Syndicate. 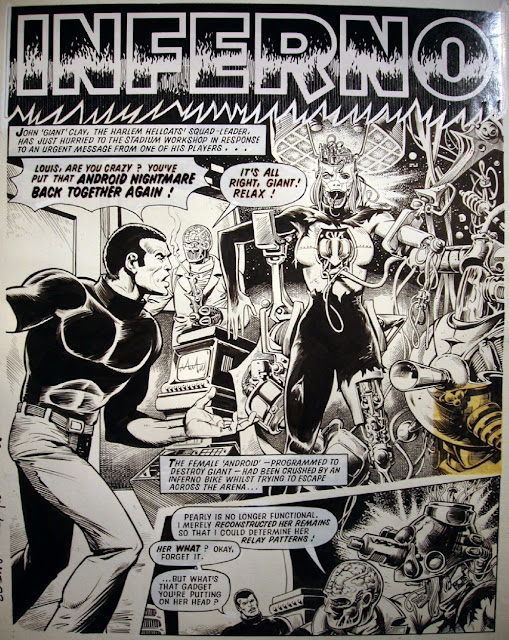 SLIM
He is still sick-listed.

LOUIS MEYER
He rebuilds Pearly to discover whether there is any information contained in her memory cells. He finds a link to A.D. Kalman and goes on assignment in search of him.

OTHER CHARACTERS
A. D. KALMAN
He is the qualified servo-electro engineer that constructed Pearly for the Syndicate.

WORST LINES
Unidentified Harlem Hellcat: "Weeowww! Look at that Firebowl...L-like it's waitin' to swallow us!"

INFLUENCES & REFERENCES
Louis Meyer's jacket would suit Two-Face from Batman (1942) and the cliffhanger of the roadliner hanging over the edge of the cliff is very reminiscent of The Italian Job (1969).

MISTAKES
Pearly's demise is stated as the result of being crushed by an Inferno bike, which it wasn't.

REVIEW
Another part of Inferno that is largely empty of Inferno, but this time it's made up of bits and pieces: Louis Meyer's investigation, Marvin's training, setting up the Sharks for the next match, the roadliner competition and the final precipice. It sounds like too much, but the syndicate conspiracy moves along nicely and the literal cliffhanger is a nice note to end on.
Posted by Dave at 10:00