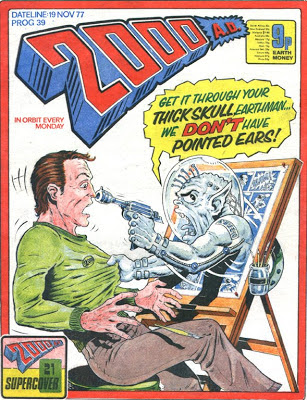 This prog bore a supercover that was also potentially a self-portrait by Brett Ewins and Brendan McCarthy alongside Invasion, Dan Dare, Judge Dredd and M.A.C.H.1 strips.

FIRSTS & LASTS
Moody Bloo is named for the first time.

INFORMATION
In Inferno, play continues despite the death of a player.

The score so far is 4 cave-ins (12 points) to the Rochville Rockets to the Washington Wolves 0 (0 points).

GIANT
He doesn't suffer from the hallucinations affecting the rest of the team. He and Slim rescue a comatose Junk from crashing. Charlie Vance has planted $5,000 in his locker.

SLIM
He doesn't suffer from the hallucinations affecting the rest of the team. He and Giant rescue a comatose Junk from crashing. Charlie Vance has planted $5,000 in his locker.

ZACK
He doesn't suffer from the hallucinations affecting the rest of the team. Charlie Vance has planted $5,000 in his locker.

OTHER CHARACTERS
CHARLIE VANCE
He has "fixed" the team's salt-gum somehow and planted $5,000 in the lockers of the three former Harlem Heroes.

MOODY BLOO
Cave-Man for the Washington Wolves. He hallucinates, scores a cave-in at his own cave and collapses.

'JUNK' JACKSON
Squad leader for the Washington Wolves. He collapses at the controls of his bike and Giant and Slim lift him off just in time to avoid a crash.

ROBINSON
A biker for the Washington Wolves. He skids into the Judge-Pod and out of play.

ARTIE GROAT
Flyer for the Rochville Rockets. He scores a cave-in.

BEST LINES
Fan: "Moody Bloo is gnawing at the cinders with rage."

I'm glad to see this back, albeit now with two G's. The combined effect of "What on Saturn's rings", "Jupiter's moons" and "For Zlot's sake" has made the Harlem Heroes dialogue a bit more space age.

INFLUENCES & REFERENCES
Moody Bloo almost shares his name with Moody Blue (1977), the final studio album by Elvis Presley, and also in a plural sense the sixties rock band from Birmingham, The Moody Blues.

MISTAKES
Moody Bloo says "Duuuh? I can see three of 'em.". Well I can see fourteen of 'em. He then scores an own-goal and concedes 6 points, but that was worth 3 points in Part 2.

RETROSPECT
Narcotic chewing gum would indeed become a reality, either with sedative or
hallucinogenic effects.

All the right pieces are here: the hallucinations, the peril, the rescue, the realisation that the gum is "fixed" and the planting of suspicious cash, not to mention the unfavourable scoreline. Yet somehow it seems less than the sum of its parts.
Posted by Dave at 10:00