SYNOPSIS
Giant talks us through the features of the team's super liner.

INFORMATION
Super Liners are a new breed of road vehicles. They use special roads marked 'Super Liner Only' and park outside cities in huge Liner Parks.

This particular model of Super Liner is 60 metres long, 22 metres tall and has an unladen weight of 200 tonnes. It accelerated from 0 to 100 mph in 4 seconds and has a cruising speed of 300 mph. The engine is powered by a nuclear generator which drives a bank of hover engines in the 'skirt' and a forward thrust engine in the tail. A computer guidance system assists the pilot in driving the liner. The Liner's engine was built by the Power Division of Global Dynamics Corporation, while the bodywork is by Forde Transportation Incorporated. 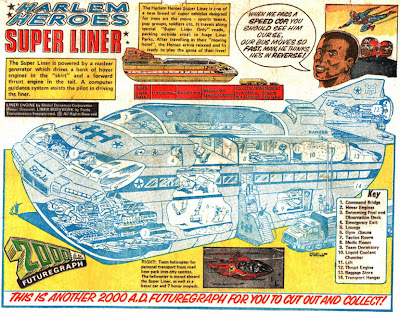 It has four levels. Starting at the top, the first level hosts the swimming pool and observation deck in front of the thrust engine. On the second floor you will find the command bridge, tactics room, medic room, liquid coolant room and baggage store. There is a lounge on the third floor, while the fourth features the gym and sauna, dormitory, while a transport hanger crosses both of the lower floors. The transport hanger contains the team helicopter, a hover car and seven hover mopeds.

WORST LINES
Giant: "When we pass a speed cop, you should see him curse, our bus moves so fast, man, he thinks he's in reverse!"

REVIEW
The colour of the super liner in the cutaway drawing is oddly muted and we don't really learn much more than we did reading Parts Five and Six of Harlem Heroes strip itself.