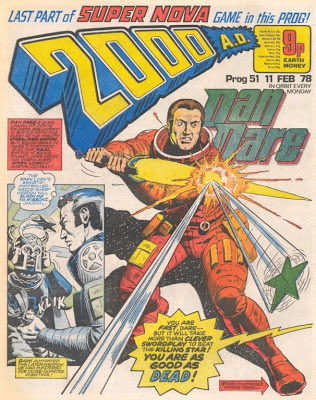 After another Dan Dare cover by Dave Gibbons and another batch of Supernova game cards, this prog also had Invasion, Dan Dare, Judge Dredd, Tharg's Future Shocks, The Visible Man and Walter The Wobot strips.

SYNOPSIS
The Harlem Hellcats risk-taking gets the better of them.

FIRSTS & LASTS
The first time the Harlem Hellcats have lost a match and the first appearance of Regal Eegle.

It is possible to advertise on the public video.

GIANT
He admonishes the Harlem Hellcats for taking too many risks.

SLIM
His jet-pack explodes and he receives third-degree burns. The medics get to him just in time. Slim is placed in pain-killing plasma and will need a couple of skin-grafts over the next few weeks. He will be absent from the next match. 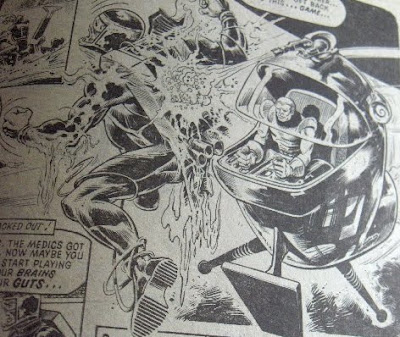 ZACK
He fears that Slim may have been killed.

LOUIS MAYER
He resigns as a Harlem Hellcat player, electing to be the team's manager instead. His first task as manager is to advertise for replacement players with an ad on the public video.

MOODY BLOO
He spends two minutes in the cage for hitting a Firbank Fiend with his power-bat.

JUNK
He is the Harlem Hellcats most experienced player. Junk takes over as cave-man whilst Moody Bloo is in the cage, but concedes two cave-ins.

OTHER CHARACTERS
REGAL EEGLE
Apparently, he calls himself the greatest biker in the world. Regal Eegle has chosen to try out for the Harlem Hellcats. 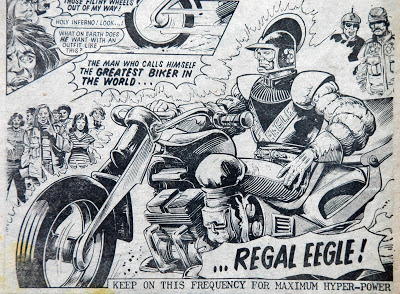 BEST LINES
Giant: "...Most of you injured. Slim almost burned alive! Who needs 'droid killers to waste us, when we can do the job ourselves?"

Let's get the name in.

CATCHPHRASES
Infernomania got a mention a few parts ago and now we see that taken to a logical conclusion: Infernomaniacs.

INFLUENCES & REFERENCES
Regal Eegle's name is obviously a reference to Evel Knievel (1938–2007), the daredevil stunt biker who attempted over 75 ramp-to-ramp motorcycle jumps and gained an entry in the Guinness Book of World Records for "most bones broken in a lifetime".

REVIEW
Inferno has limped from cliffhanger to cliffhanger and so it's refreshing to see what's at stake here. Slim pays a price and rather than having peril pour on at the last moment to be undone as quickly as possible by the beginning of the next part, he pays it in consecutive panels in the middle of the strip. Sadly this does rob the inevitable cliffhanger of any strength. It's essentially no more than: man rides bike.