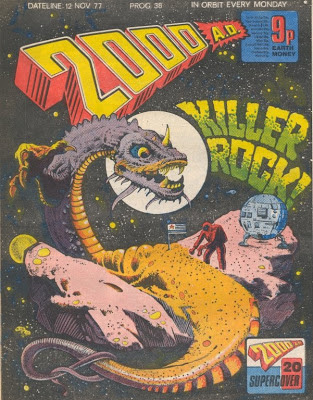 SYNOPSIS
The Washington Wolves play the Rochville Rockets, but a spot of blackmail might harm their chances.

FIRSTS & LASTS
First use of Giant's real name, probably the first use of the word "Zrag" in 2000 AD.

INFORMATION
Inferno stadiums are known as Firebowls and some have testing ranges. A double hitch-hike involves a flyer sat on the back of a bike and another sat on his shoulders.

Since the former Harlem Heroes joined the Washington Wolves, the bookmakers are offering odds of twenty-to-one in their favour. 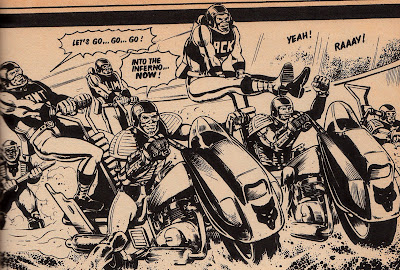 In many sports players chew salt-gum to replenish minerals lost in perspiration. The Harlem Heroes had their own brand of salt-gum when they played Aeroball.

GIANT
His real name is John Clay. He has kept some Harlem Heroes Salt-Gum from the Aeroball days which he shares with Slim and Zack.

SLIM
His surname is Shafto.

ZACK
He sits on Slim's shoulders for his double hitch-hike manouevre.

OTHER CHARACTERS
CHARLIE VANCE (formerly DON WEPNER)
The manager of the Washington Wolves. Mr. Grubb and Mr. Torso lock him in the Firebowl's testing range and threaten to fire Inferno balls at him unless the team loses its next game.

MR GRUBB & MR TORSO
They threaten Vance in an attempt to convince him to throw the next match.

LANNIE MORRIS
Described as the "best Bikeman" for the Washington Wolves. He climbs the firebowl's death-wall on his bike and inexplicably sees a nightmarish monster when reaches the top. He loses control of his bike and falls. He is killed.

DEATHS
One. Lannie Morris killed either by the fall or the resulting bike explosion as he loses control of his bike and they both fall to the floor of the Firebowl.

BEST LINES
Slim: "Hey Man - I didn't realise we had so many supporters!"
Zack: "They haven't come to support us, they've come to watch us die!"

WORST LINES
Charlie Vance: "Uuuh? Someone calling to me from the testing range..!"

If it's not already a catchphrase, it should be...

REVIEW
For some reason this part is obsessed with names as Giant, Slim and Don Wepner become John Clay, Shafto and Charlie Vance respectively. The Salt-Gum is an obvious plot point, but Lannie's hallucination is still a definite highlight.

Next Prog: As What He Sees, Goes Weird And Hazy, Watch The Cave Man Going Crazy!
Posted by Dave at 10:00