Judge Dredd: The Return Of Rico! 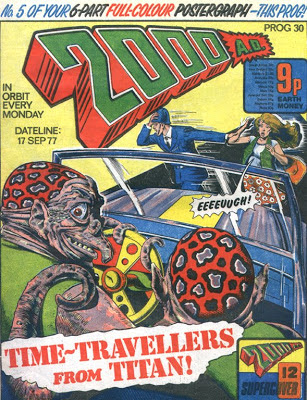 SYNOPSIS
Dredd's brother returns to Mega-City One looking for revenge.

FIRSTS & LASTS
First strip with an explicit title, first appearance of Rico, first mention of Dredd being a clone, Dredd's first name and the first flashback to Dredd's youth.

INFORMATION
Twenty years ago, Mega-City One's Kennedy Space-Port only handled one shuttle a week. It has since become much busier.

There is a penal colony on Titan. Judges convicted of crimes get a sentence of twenty years there. Prisoners have their mouth and nose sealed and their body adapted to work in a vacuum without a space suit.

JUDGE DREDD
He is a clone. His first name is Joe. At the Judge Academy, his marksmanship needed work, fellow clone Rico Dredd was his best friend and got him through. On passing out day when they became rookie judges, Joe Dredd came second. Rico forces him into duel, which Joe wins.

RICO
Cloned from the same genetic material as Joe Dredd. As a cadet, he was an excellent marksman. On passing out day when they became rookie judges, he came first. Rico took bribes, ran a protection racket and killed someone that couldn't pay. Joe Dredd arrested him and he was sent to the penal colony on Titan for twenty years. He was surgically altered to work in a vacuum. He swore revenge on Joe Dredd. He served his twenty years and returned to Mega-City One to kill him. He challenged him to a duel and lost. Joe Dredd shot him dead.

ARRESTS
Two. After Dredd shoots a perp there are two more with their hands in the air.

DEATHS
Three. It appears that Dredd shoots a perp dead. In a flashback, Rico kills someone in his protection racket. Dredd kills Rico in a duel, Dredd drew his gun faster.

Rico Dredd (having killed someone he was extorting): "Joe! Listen, we can make this look like an accident!"

WORST LINES
Rico Dredd: "I can eat vacuum and live!"

CONTINUITY & CROSSOVERS
Dredd mentioned his time at the Academy in Judge Dredd: 'The Academy Of Law'.

INFLUENCES & REFERENCES
Dredd references the much-covered song 'He Ain't Heavy, He's My Brother' most famously released by The Hollies (1969).

Titan has an atmosphere, not a hospitable one admittedly but it's definitely not a vacuum.

Rico says "That's right Joe black. Airless cold like Titan - I want you to know how it felt..." and since the dialogue is so good in this strip this really stands out as awkward. Between the capitalisation and the punctuation there is a lot of room for confusion. Should it be "Black, airless, cold" or is Rico referring to Dredd as Joe Black?

RETROSPECT
The relationship between Joe and Rico Dredd will be revisited several times in later strips.

NOTES
Titan is the largest of six moons that orbit Saturn.

REVIEW
Up to this point the main focus of Judge Dredd has been less Judge Dredd and more Mega-City One and worldbuilding. The first story to delve into Dredd's past is excellent and ups the ante for the strip. The dialogue is wonderful, the page layouts are compeling and while the artwork varies, it is fantastic when it needs to be. It draws the focus to the reveal of Rico's face expertly. This strip achieves more in six pages than the previous six strips managed in total.