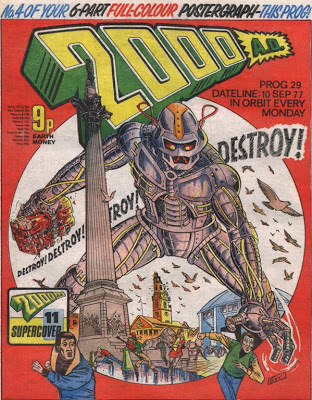 NAME
Judge Dredd: 'The Neon Knights'
(according to Barney this strip is also known as 'KKK')

SYNOPSIS
Dredd takes on a Klan determined on vengance against robots.

Following the Robot Wars there is an increase in ill feeling toward robots and their owners, nicknamed 'Robo-Lovers'. Klans, such as the Neon Knights, have formed to take revenge on robots. They are lead by a Grand Master, smash up robots for minor offences and have imposed a Ten o'clock curfew on them. 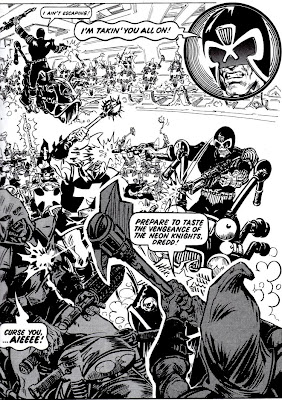 JUDGE DREDD
He investigates the murder of a robot and his murder and later comes to Walter's aid. He takes on the Neon Knights and fights their Grand Master. He unmasks him as a cyborg and arrests his disenfranchised followers.

OTHER CHARACTERS
WALTER
He is attacked by a Klan on his way to Dredd's apartment. Dredd comes to his aid. Despite taking damage the Mek-Doctor says he can be fixed.

ARRESTS
At least seven Klansmen are seen being ushered into a Police vehicle in the last panel, but they probably arrested them all.

DEATHS
Two. Clive the robot and his owner are murdered by the Klan.

INFLUENCES & REFERENCES
The Ku Klux Klan are an obvious influence here, notably featured in films like The Birth Of The Nation (1915), The Burning Cross (1947) and Blazing Saddles (1974), while the unmasked Cyborg looks very like the Kraal androids of Doctor Who's The Android Invasion (1975).

MISTAKES
When the Grand Master of the Neon Knights says "Hold it! Destroying free robots is dangerous." etc, the speech bubble has two tails? It looks like Walter could be saying it.

REVIEW
A strip dealing with the aftermath of 'Robot Wars' was a great idea, but while 'Robot Wars' was a subtle and thought-provoking allegory for slavery this instead has very obvious and unfortunate roots. I don't think that the hooded Klansmen with a K theme helps the strip, that said the action sequence is great and it's nice to see Dredd standing up for Walter.