SYNOPSIS
The former Harlem Heroes turn their hand to a new game. 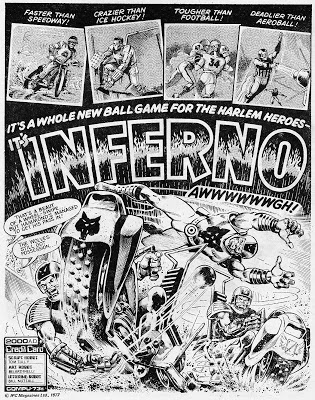 INFORMATION
Inferno is a sport sweeping the board in popularity. It is regarded as "faster than Speedway, crazier than Ice Hockey, tougher than American Football and deadlier than Aeroball". Positions include Flyers and Block Fliers who wear jet-packs, while Bikers and strike-men ride motorbikes and are equipped with a massive power-glove containing a gas-fired 'pick hook' which when launched and aimed correctly connects with a flyer's belt, ropes and tackles them. Finally there are the Cavemen who are situated in the semi-circle and guard the goal or cave. The players wear fibre-glass armour.

The playing area has a series of lights that flash and when one turns green that is where the ball will enter play. Flyers must touchdown inside the semi-circle (or score-semi) before they can shoot to score a 'cave in'. The only way a biker can score is to bounce the ball off an airman into the cave. A wheel-swipe is a manouevre which involves passing the ball under the motorbike whilst in motion. The game is ended by the sounding of a peace-buzzer. 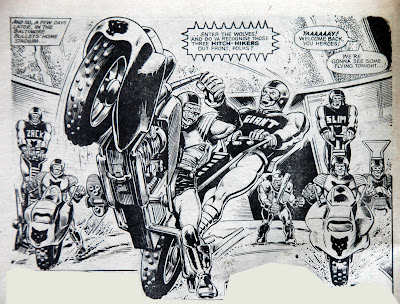 The New York Aces and the Washington Wolves are Inferno teams that play in the Premier Division of the American East-Coast Inferno League.

The Baltimore Bullets are another Inferno team.

Aeroball fell from favour not long after the Harlem Heroes became world champions.

GIANT
He doesn't regard Inferno as a game requiring skill. He and the other former Harlem Heroes play for the Washington Wolves as guests. The Baltimore Bullets score a Cave-in as the ball bounces off him and into the cave.

SLIM
He is an Inferno fan.

ZACK HARPER
He is an Inferno fan. He is struck in the chest by the ball during the game against the Baltimore Bullets.

DON WEPNER
The manager of the Washington Wolves. He convinces the Harlem Heroes to play as guest flyers in the match against Baltimore Bullets.

BEST LINES
Washington Wolves Fan: "Aeroball is washed up... and so are the Harlem Heroes!"

CATCHPHRASES
No catchphrases as such, just several examples of Inferno's terminology like cave-in, block flier etc.

CONTINUITY & CROSSOVERS
Giant, Slim and Zack were previously seen in Harlem Heroes, while Giant has appeared in Judge Dredd: The Academy Of Law, Part 2 although that strip is set years after Inferno.

MISTAKES
The spellings Flier and Flyer are both used.

REVIEW
Bring back Aeroball. It's nice to see the Harlem Heroes back, but their new game is not as exciting as it thinks it is. Excessive rules require excessive exposition, which slows the whole thing down. Where Part 1 of Harlem Heroes gave us Aeroball, a fatal crash and a disembodied brain, Part 1 of Inferno's peril is that Harlem Heroes might not be very good at a sport they aren't used to playing. On the plus side, the artwork is very nice and the commentator is established confidently without wasting a panel on seeing them.
Posted by Dave at 10:00