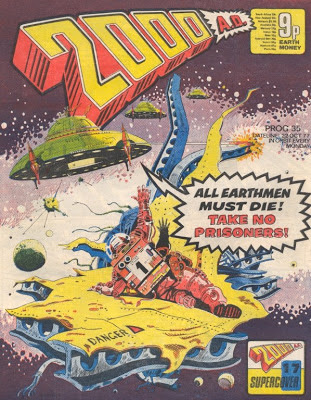 NAME
Judge Dredd: 'Mutie The Pig', Part 2
(according to Barney this strip is also known as 'Death Of Dredd')

SYNOPSIS
Dredd and Gibson fight to the death.

INFORMATION
Grover Street, 9th Street and a funeral parlour where they meet are represented in the Academy of Law's training recreation of part of Mega-City One.

Cadet's Rights is the method used to settle arguments at the Academy of Law. It involves fisticuffs.

Judge's Lawgivers can fire ricochet bullets and can be set to rapid fire.

JUDGE DREDD
He was nicknamed Old Stoney-Face at the academy. He and Gibson settled a difference using Cadet's Rights, they vowed to always settle disputes the same way. Dredd had his brother's name stricken from the Academy's honour roll when he was revealed to be a criminal. He is a master of the effective use of ricochet bullet spray.
Gibson's attempt to kill Dredd failed and he faked his own death and funeral to catch Gibson. He accedes to Gibson's request to fight to the death at the academy under Cadet's Rights. Dredd kills Gibson and removes the dead Judges name from the honour roll.

OTHER CHARACTERS
JUDGE GIBSON
Dredd unmasks and arrests him. He insists on a fight to the death under Cadet's Rights, but Dredd kills him. His name is struck from the Academy's honour roll. 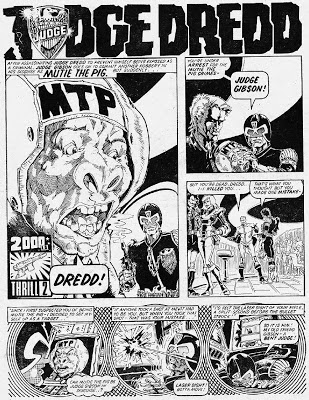 THE PRINCIPAL OF THE ACADEMY
He agrees to fight between Judges Dredd and Gibson. He insists that the current cadets watch.

ARRESTS
One. Gibson, sort of.

BEST LINES
Academy Tutor: "Note the effective use of the ricochet spray, Cadets - Judge Dredd is a master of this technique."

CONTINUITY & CROSSOVERS
Gibson mentions that the penalty for a bent Judge is twenty years on Titan The Return Of Rico! and explains why only one Dredd is listed on the honour roll first seen in 'The Academy Of Law', Part 1.

MISTAKES
Gibson mentions the Academy's honour role. Thankfully it is spelt correctly in the accompanying artwork.

RETROSPECT
In addition to the principal of the Academy of Law two tutors depicted here are missing limbs and although we haven't been explicitly told as such a picture of ex-street Judges becoming tutors is beginning to appear.

T. B. Grover is a pseudonym for John Wagner, while Emberton is really Ian Gibson.

REVIEW
This is brilliant. This strip, arguably more than The Return Of Rico!, shows why bent Judges are a great start to a Dredd story. It hits him where he hurts. If I had one criticism it's that it's a shame we don't learn more about Gibson's motivations.

Next Prog: Dredd Versus Captain Strange!
Posted by Dave at 10:00