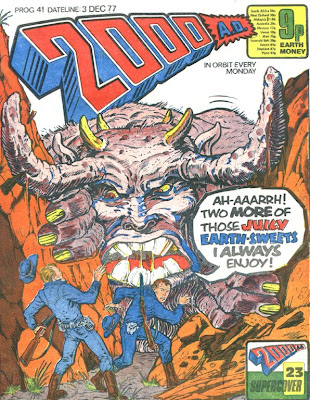 This prog also featured a supercover by Brett Ewins and Brendan McCarthy as well as Invasion, Bonjo From Beyond The Stars, Dan Dare, Judge Dredd, Tharg's Future Shocks and M.A.C.H.1 strips.

SYNOPSIS
The former Harlem Heroes attempt to clear their name and recruit a new Inferno team.

INFORMATION
Match fixing allegations are investigated by an Inferno Association Enquiry, lead by a controller.

The Justice Judges have recently entered a team in the Inferno League.

The old Harlem Aerobowl is still standing and the right size for an Inferno Firebowl. with the addition of a death-wall and some cinders it would be ready.

Scrambling through the condemned sky-flats on a bike is the latest thrill-craze. Rule number one is that you do not deliberately injure another player. 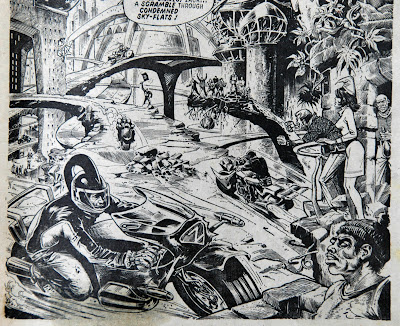 GIANT
His guilt or innocence is not proven by the evidence submitted to the Inferno Association Enquiry.

SLIM
His guilt or innocence is not proven by the evidence submitted to the Inferno Association Enquiry.

ZACK
His guilt or innocence is not proven by the evidence submitted to the Inferno Association Enquiry.

LOUIS MAYER
He has a new body with a transparant skull. He had a feeling that the other former Harlem Heroes would visit the Harlem Aerobowl today.

OTHER CHARACTERS
RIP VENNER
A former justice Judge who "leaned on one or two law-breakers too hard", he turned to sky-scrambling when they threw him out. He indicates that he might be interrested in joining Giant's Inferno team.

WORST LINES
Slim: "We told you we were innocent, man! That should have been good enough for you!"

CONTINUITY & CROSSOVERS
Louis Mayer and the Harlem Aerobowl both previously featured in Harlem Heroes, while the Justice Judges would presumably be forebears of those seen in Judge Dredd. The Harlem Aerobowl will return to its Aeroball roots by the time of Judge Dredd: The Academy Of Law.

MISTAKES
The use of the word Enquiry rather than Inquiry would be incorrect in British English, but not in American English and so it seems churlish to call it a mistake.

REVIEW
The courtroom scene, the Sky-scrambling sequence and the return of Louis Mayer are all great. The getting the band back together nature of this part is very appealing and I'm all too aware that this is the second Infernoless part of Inferno in a row that I've enjoyed more than its sporting predecessors.

Continued Next Prog.
Posted by Dave at 10:00