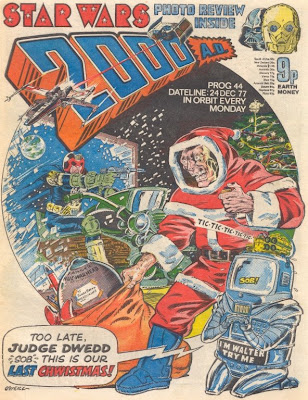 This strip lay behind a Dredd cover by Kevin O'Neill and Invasion, Bonjo From Beyond The Stars, Dan Dare, Judge Dredd and M.A.C.H.1 strips.

SYNOPSIS
Giant inspires the Harlem Hellcats to turn the game around.

INFORMATION
Inferno Cave-men carry power-bats. It is legal to use a biker's flick-pick as a trip-wire.

GIANT
He inspires the Harlem Hellcats to play with teamwork. Despite the new team, he is still connected by some fans with the salt-gum and bribery incidents.

SLIM
He scores a cave-in.

ZACK
He and Giant appear to do a mid-air switch with the ball, but actually they do a double-dummy instead and Giant retains it.

LOUIS MAYER
He proposes tracking down the organisation that Vance worked for.

OTHER CHARACTERS
RIP VENNER
He and Teejay both go for the same ball, until Giant grabs it from between them. He and Junk use their flick-picks as a trip-wire to get the ball from Ernie Shafer.

JUNK JACKSON
He and Rip use their flick-picks as a trip-wire to get the ball from Ernie Shafer. Junk found a gambling chip from the Crystal Maze in Vance's office before the last Washington Wolves game.

TEEJAY
He scores a cave-in.

ERNIE SHAFER
His refusal to pass to his team mates leaves him isolated and the victim of a trip-wire suspended between 'Junk' Jackson and Rip Venner's bikes. He loses possession of the ball to Teejay. 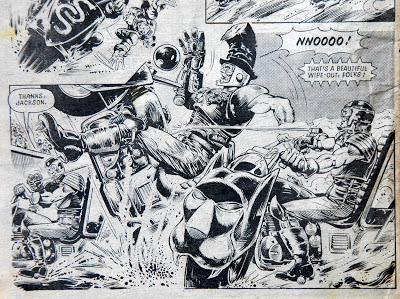 WORST LINES
Rip Venner: "Oh no, we missed the interception!"

MISTAKES
The panel of Giant talking to Louis Meyer on the last page borders on the bewilderingly pornographic.

RETROSPECT
Junk found a gambling chip from a freaky arcade called the Crystal Maze. The Crystal Maze would later be the name of a British TV game show broadcast between 1990 and 1995, initially presented by Richard O'Brien and later by Ed Tudor-Pole.

REVIEW
This is more fun and the art is an improvement on the last part. It's odd that Louis Meyer is quite literally being sidelined and that the Sickles' fans wait until they are losing to accuse Giant of cheating.