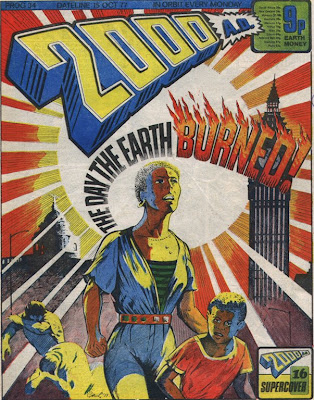 NAME
Judge Dredd: 'Mutie The Pig', Part 1
(according to Barney this strip is also known as 'Death Of Dredd')

FIRSTS & LASTS
The first Judge Dredd strip to be reprinted.

For the first time in over eighty years the Mega-City One's weather controls have been set to winter as a mark of respect for the late Judge Dredd. 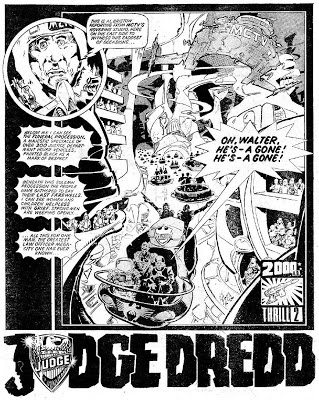 JUDGE DREDD
He was born in 2066. Believed killed by a mystery assassin, he is given a funeral with 200 Justice department hover vehicles painted black and buried on the East Side. He is not dead.

OTHER CHARACTERS
CHIEF JUDGE
He speaks at Dredd's funeral and declares a day of mourning. 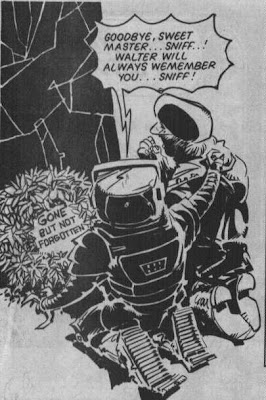 JUDGE GIBSON
He and Dredd were at the academy together. He is left-handed. He speaks at Dredd's funeral and lights the flame of justice on his gravestone. He disguises himself as Mutie The Pig to commit robberies. When Dredd learned of this Gibson shot him, believed him dead and resumed his crime spree as Mutie. Dredd returned to stop him.

CONTINUITY & CROSSOVERS
Judge Gibson was listed on the honour roll for Dredd's year at 'The Academy Of Law'. Walter cries oil again as he did in 'Walter's Secret Job'. Since Dredd's gravestone confirms that the year is still 2099 and he had his birthday in 'Brainblooms' he must be 33 years old now.

INFLUENCES & REFERENCES
The Chief Judge paraphrases Antony from Act 3 Scene 2 of William Shakespeare's Julius Caesar (1599), "I come to bury Caesar, not to praise him. The evil that men do lives after them"

MISTAKES
Al Bristow describes Maria as Dredd's landlady and takes us live to the scence.

REVIEW
The artwork is great and the set up is nicely done, but it doesn't really fool you into think Dredd is actually dead.
Posted by Dave at 10:00