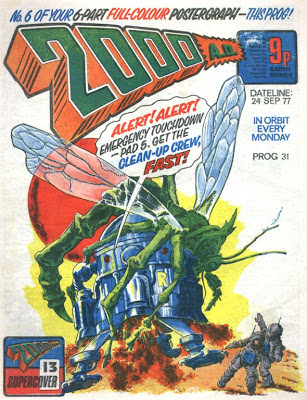 NAME
Judge Dredd: 'Devil's Island'
(according to Barney this strip is also known as 'Return Of Whitey')

INFORMATION
Mega-City One has not had snow for decades. The city's weather control centre is called the Weather Congress.

Devil's Island prison has an observation post and a workshop.

JUDGE DREDD
He tracks and escaped Whitey from Devil's Island. He offers his life in exchange for Whitey's hostage. Whitey shoots him in the hand, but he manages to distract Whitey, switch off his weather control computer and arrest him. 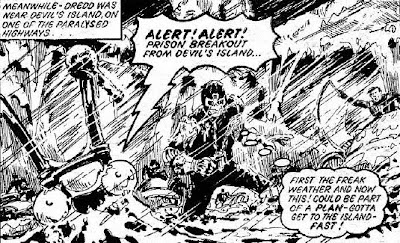 OTHER CHARACTERS
WHITEY
His cellmate "Einstein" has built a mini-weather control computer in the prison workshop and covers Devil's Island and its surrounding roads in snow. Whitey kills "Einstein", clubs a prison guard, steals his gun, shoots off his chains and escapes. He kills one man for his car and takes his female friend as a hostage.

BEST LINES
"Einstein": "I-I did it, Whitey! Told ya I could jam the weather control an' make stop the traffic..."
Whitey: "An' with the traffic stopped - suddenly we ain't an island no more!"

WORST LINES
Dredd: "Chains...in the old days they put them on wheels for grip in snow! I'll do the same with my bike..."

CATCHPHRASES
None. Although the last thing Dredd says to Whitey is practically the same in each of his three appearances so far.

CONTINUITY & CROSSOVERS
Whitey previously appeared in the Judge Dredd strips: 'Judge Whitey' and 'Whitey's Brother'. Megoil featured in the last part of 'Robot Wars', while weather manipulation was an important part of that story as well as 'The Solar Sniper'.

INFLUENCES & REFERENCES
There is a strong possibility that "Einstein" is reference to Albert Einstein (1879-1955) who developed the general theory of relativity and therefore a writing shortcut for genius.

MISTAKES
How is Whitey the only prisoner to escape?

NOTES
Whitey wasn't chained whilst in prison before so presumably this is punishment for his previous escape in 'Whitey's Brother'.

REVIEW
The story feels rushed and frustratingly Whitey's clubbing of a prison guard, stealing his gun and shooting his chains off all happen between panels. After Dredd's uses it's good to see weather manipulation being used for evil.
Posted by Dave at 10:00