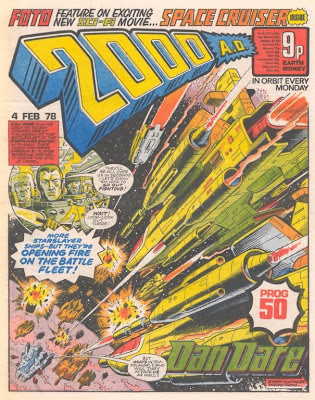 This prog had yet another Dan Dare cover by Dave Gibbons, another six Supernova cards and Invasion, Bonjo From Beyond The Stars, Dan Dare, Judge Dredd, Tharg's Future Shocks, The Visible Man and Walter The Wobot strips.

INFORMATION
Inferno games are refereed by a match controller who is not in the Firebowl itself, but can project a hologram to talk to players directly.

Inferno Flick-Picks can be used to divert energy blasts.

The use of power-gloves for fisticuffs is prohibited and results in a half-way penalty: a straight duel between a biker and a cave-man.

GIANT
He has recovered from his injuries. He returns to play, but worries that the Harlem Hellcats have become angry and violent. 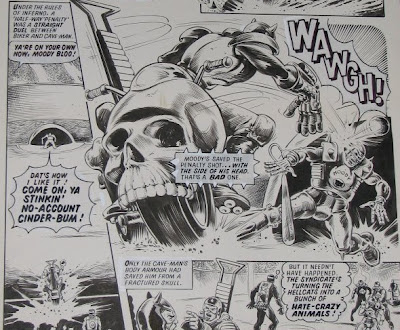 ZACK
He is distraught to discover that Pearly was an android.

LOUIS MEYER
He prevents Pearly from killing Giant. He and Pearly had the same body and photoreceptors. He was aware of the transmissions that she was receiving.

RIP VENNER
He punches a Firbank Fiend with his power-glove.

MOODY BLOO
He saves a half-way penalty and prevents a cave-in with the side of his head, but almost fractures his skull.

OTHER CHARACTERS
PEARLY
She is destroyed by an Inferno ball to the back of the head. Her body was a Mark 4 GS and may have been nuclear powered.

DEATHS
One. A Firbank Fiend accidentally throws an Inferno ball at the back of Pearly's head and damages it beyond repair.

BEST LINES
Match Controller: "I'm not sure what's going on, gentlemen, but pehaps a ten-minute 'time-out' will produce a few explanations."
Official (of Pearly): "You heard him, boys. Let's get this mess off the pitch."

WORST LINES
Rip: "I can't abide law-breakers at any price...'specially punks that hide behind 'droids'!"

CATCHPHRASES
It's good to see the return of "Aieeeee!"

REVIEW
The sight of Pearly in pieces is very nicely depicted, but once again it's the Inferno that lets Inferno down. The Firbank Fiends still have no identity, Louis Meyer's mini-flashback is very odd, Moody Bloo's big save is very underwhelming and the cliffhanger could have done with more set up.
Posted by Dave at 10:00